A few words with tUnE-yArDs 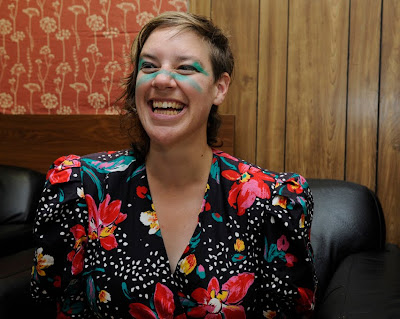 Photo used with the kind permission of David Atlas
Merrill Garbus' tUnE-yArDs project was one of the late, great musical surprises of my 2009. Sean over at Said The Gramophone included Hatari on the Gramophone's best of the year compilation and I was well and truly knocked out by its adept mix of ragged DIY garage rock, African vocal flourishes reminiscent of Letta Mbulu or Dorothy Masuka and respect for melody. A close listening to the excellent BiRd-BrAiNs LP followed and the album has stayed on heavy repeat in my home for over nine months now.

Immediately following a live NY performance, Merrill was kind enough to speak with The Tofu Hut for a few minutes. Here's some of the high points of that conversation.

[NB: This transcription has been edited for clarity, with an eye toward maintaining meaning. Errors should be traced back to your humble narrator, not Ms. Garbus.]

Tofu - Where did the tUnE-yArDs name and the funky upper/lower case spelling come from?

Merrill - The name came from an early song of mine where I describe a "tune-yard" as a place where I can go and harvest my music, to pluck it from the ground. I like to think of songs as living independently of me; instead of having to feel the pressure of creating something solely from my own experiences, I can go and cultivate the finished product from the tune yards. My work is to manifest songs somehow, rather than make them from scratch.

The capitalization was just to draw peoples' eyes on MySpace, back when that's where my music was. It was an attention-getting device and also a way of making people have to slow down when they wrote about me; every time they typed my name they had to really think about what they were doing. I like being a little abrasive and sticking in people's teeth that way. [Laughs] And there's certainly many people, many writers, that have expressed their annoyance at that choice! But you know, I have never actively enforced that capitalization. It's not in my contract or anything.

Tofu - Do you have any regrets? If you could go back and give yourself another alias, would you?

Merrill - No, I really like my name now. It's big enough to encompass a lot, which is what I hoped it could be.

Merrill - I spent time in Kenya studying music abroad with an emphasis on taarab, one of the predominant African East coast styles. I was playing violin at the time so I met and played with taarab musicians and poets in Africa, trying to better understand and explore the culture. I also learned the basics of the Swahili language. Exposure to both sounds and pattern of a different tongue and a different style of composition absolutely affected the music I'm doing now.

When I visited Tanzania, I got turned on to the famous Tanzanian musician Hukwe Zawose. Zawose was a huge influence on me in terms of how he used his voice to bring himself and the audience to a different place, a spiritual plane. He used sound to mold a different reality.

More recently, I've been listening to pygmy music from Central Africa. I had been unknowingly emulating some of their sound in Hatari. When I was first recording that song, I had jost lost my voice from overuse so when I hit the high notes, I couldn't do a smooth scale up and had to kind of yodel to reach. While I was flipping my voice like that, a friend said to me "that sounds like pygmy music" so I hunted down some recordings to compare and I really loved what I heard. Since then, I've been training my voice in that style.

African music is absolutely important to me and I know that shows in my music. I'm intrigued by rhythms and melodies that aren't Western, that stretch my capability to understand and follow. A lot of that pygmy music, just for example, I can't comprehend what's going on musically or in the minds of the singers but it's so tremendously compelling.

Tofu - I hear that African grounding in your music; the lyrics are in English, but the phrasing is not.

Merrill - Yeah, I like fucking with language! Whatever makes a thing awkward or imperfect in a traditional Western classical sense, I love being able to do that, to bend the sound and to be unpredictable.

Tofu - How does that feed into your visual aesthetics?

Merrill - You mean the face paint?

Tofu - It seems somewhere between Kabuki theater and tribal markings.

Merrill - It's a little of both really! When I play in a group, the band makes themselves up so there's certainly an element of shared community in that. Again, it's about putting the audience and me in a different reality. But the fact is that I like face paint! I like dressing up for a show! I come from a theater background, so it felt like the natural thing to do to mark the performance mask versus regular me.

Tofu - When I describe your music to other people, the phrase I find myself using is "urban rustic," by which I mean to say that you take a metropolitan mindset and couch it in something grounded and universally accessible. It strikes me as a variety of outlaw country.

Merrill - That's nice. I've gotten a lot of unique responses to what I do... someone just called me "folk hop". I'll take "urban rustic." As much as I love and appreciate the wild, I have an equal love for cities, especially as much time as I spend on the road. It's been very interesting touring throughout the US and gaining a sense of connectedness with the sprawl of cities and communities in America. It's an odd time to explore this country; I've been touring for roughly the past five or six years now and even before the recession, I was shocked by how many dead cities there are in America. Detroit. Cleveland. St. Louis. Places that are downright gutted and have been for a really long time. Places that have been dead for long enough that cheap rent is allowing artists to move in and take chances and create new artistic hubs. It's still early for that revitalization as a movement, but it's there.

Tofu - Your music touches on issues of gender and class, but it seems to me that the elephant in the room on the bird-brains album is race: you're a white woman, generally playing with a white band...

Merrill - ...playing urban music, African-influenced music. It's a fair point. Before I started making music at all, issues of race and ethnicity were on my mind all the time so when I started making music, it was my way of making the decision to take the plunge and dive into... well, dive into "It", whatever "It" is. To start the conversation that says: Yes, I am influenced by this other world that is not my world. And yes, somebody should have a problem with me making money off this music. Because _I_ have a problem with it and I want to be part of the conversation about how America interacts with and appropriates music from the rest of the world.

I spent the first part of my twenties extremely depressed, ashamed and guilty because I had just gone to Africa and I couldn't help feeling indirectly responsible for the ruin of another country. When I was in Kenya, it was so very clear that America was actively aiding a cycle that sucked out resources and art but left the powerless even more powerless. As an idealistic, upper-middle-class, white, American twenty year old trying to engage this outside culture, I didn't know what to do with that information. This current phase of my life, as a musician, is me coming to terms with that shame and trying to find my place in two worlds that matter to me. So when people say to me "Oh, you're doing African music", I sort of cringe because I know that I know so little. I have a lot of love for Fela Kuti and Miriam Makeba and many, many other artists but I know almost nothing about the vast and important musical history of a people that I'm basically thieving from. I'm stealing the heart of someone else's music. And we all do. It's tough.

My response is that instead of feeling stagnant and ashamed about my fears and guilt about those things, I try to keep moving and growing and creating as best as I can to help make that conversation happen.

Tofu - I do feel you grappling with those issues in your work, but there seems to be very little of it plainly present; your lyrics are quite personal but not very political.

Merrill - I would say that I have to begin with myself, that these liberal ideas are first and foremost going to have to come through the filter of my personal experience. If you were looking for something more explicit, I would direct you to lines like "They're dying outside" in FIYA and to the dada retelling of my African experiences in Hatari. There are hints here and there. But no, I'm not a preacher and where I'm at right now as a musician and a songwriter, I feel safer talking about my own experiences. Just lately, I've been approached about doing collaborations with rap artists, with African artists and that's very exciting to me. Maybe soon I'll have the opportunity to engender those relationships that have been on my mind for so long and we can share what we all have to offer.

tUnE-yArDs is currently (and, apparently, forever) on tour and working on a second album. If you have the opportunity to see Merrill live, take it!